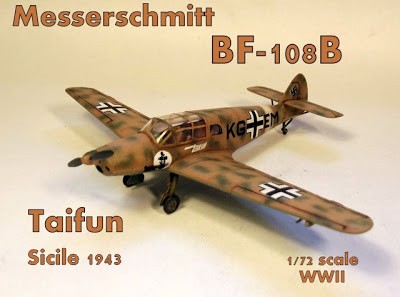 Messerschmitt Bf.108. The basic livery belongs to the aircraft flown in 1937 by Elly Beinhorn, the female pilot who choose the nickname Taifun for the plane, in the International Circuit of the Oases Race (Egypt), where she conquered the second place. Three other liveries are inside the package: one worn by another Bf.108 in the same race, two by the Luftwaffe in the Oriental front (IV./JG54, 1941) and in North Africa Libya (1941-42) Taifun is considered the true precursor of the more famous fighter Bf.109, for which experimented many technical and structural solutions.