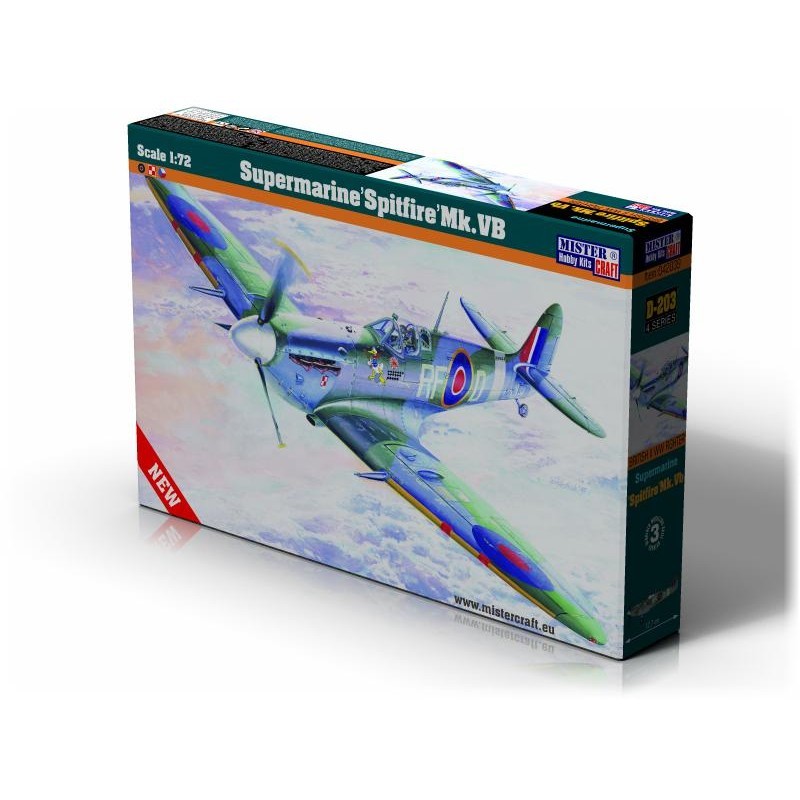 The famous Polish 303 squadron in the Battle of Britain

D-203 Supermarine Spitfire Mk.Vb 1:72 Squadron 303- Jan Eugeniusz Ludwig Zumbach (14 April 1915, Ursynów, Poland, – 3 January 1986, France) was a Polish-Swiss fighter pilot who became an ace and squadron commander during the Second World War. In the postwar period he became a mercenary in Africa and played a key role in forming the air forces of the breakaway states of Katanga and Biafra.Zumbach scored fourteen confirmed kills and a few probable, mostly against Messerschmitt Bf 109 fighters

D-270 P-51D-25 1:72 Dywizjon 303 Witold Łokuciewski (born 2 February 1917, Novocherkassk – 17 April 1990, Warsaw) was a Polish fighter ace of the Polish Air Force in World War II.Born in Russia of Polish parentage in 1917, he joined the Polish Air Force in 1936, graduating in 1938 and was posted to 112. Eskadra Myśliwska (112th Fighter Escadrille). He made several claims in September 1939, escaping to Romania and then to France. During May 1940 he claimed one bomber victory with an MS 406 local defence flight, and then made his way to the UK to join the Royal Air Force. A member of the No. 303 Polish Fighter Squadron, Łokuciewski saw considerable action through 1940–41. His pseudonym was "Tolo".

D-208 Hawker Hurricane Mk.II 1:72 -Wacław Król (1915–1991) was a Polish military pilot and a Air Colonel of the Polish Air Force. A veteran of the Polish Air Forces in France and Great Britain during World War II, he served with distinction alongside the Royal Air Force and rose to the rank of Wing Commander. He also became one of the Polish fighter aces of the war (ranked 15th on Bajan's list). After the war he became a successful historian and author of numerous books.

Wacław Król graduated from the Polish Air Force Academy of Dęblin in 1935 and joined the Polish Air Forces. A deputy commander of the Polish 121st Fighter Escadrille, he scored his first aerial victory on the very first day of World War II (a Henschel Hs 126, shared with Cpl Paweł Kowala). During the Nazi and Soviet invasion of Poland he downed one additional Heinkel He 111 bomber. After September 17 he escaped with his unit to Romania. Interned there, he managed to escape and reach France, where he re-joined the Polish Air Forces. Temporarily attached to the French Groupe de Chasse II/7, he took part in the Battle of France. During the German invasion of that country he scored two enemy bombers (Heinkel He 111 and Dornier Do 17) and a probable kill of another Do 17.Altogether during the war Wacław Król accomplished 286 missions and downed  9 enemy planes, and scored 3 additional probable kills.

No. 303 ("Kościuszko") Polish Fighter Squadron  was one of 16 Polish squadrons in the Royal Air Force (RAF) during the Second World War. It was not just the highest scoring of the Hurricane squadrons during the Battle of Britain, but it had the highest ratio of enemy aircraft destroyed to their own lost (safest).

The squadron was named after the Polish and United States hero General Tadeusz Kościuszko, and the eponymous Polish 7th Air Escadrille founded by Merian C. Cooper, that served Poland in the 1919–1921 Polish-Soviet War. No. 303 was formed in July 1940 in Blackpool, England before deployment to RAF Northolt on 2 August as part of an agreement between the Polish Government in Exile and the United Kingdom. It had a distinguished combat record and was disbanded in December 1946.Withdrawn from battle for a rest on 11 October 1940, the squadron had claimed 126 kills in six weeks. Relative to aircraft downed, losses were small with 18 Hurricanes lost, seven pilots killed and five badly wounded.Although the number of Battle of Britain claims was overestimated (as with virtually all fighter units), No. 303 Squadron was one of the top fighter units in the battle and the best Hurricane-equipped one.